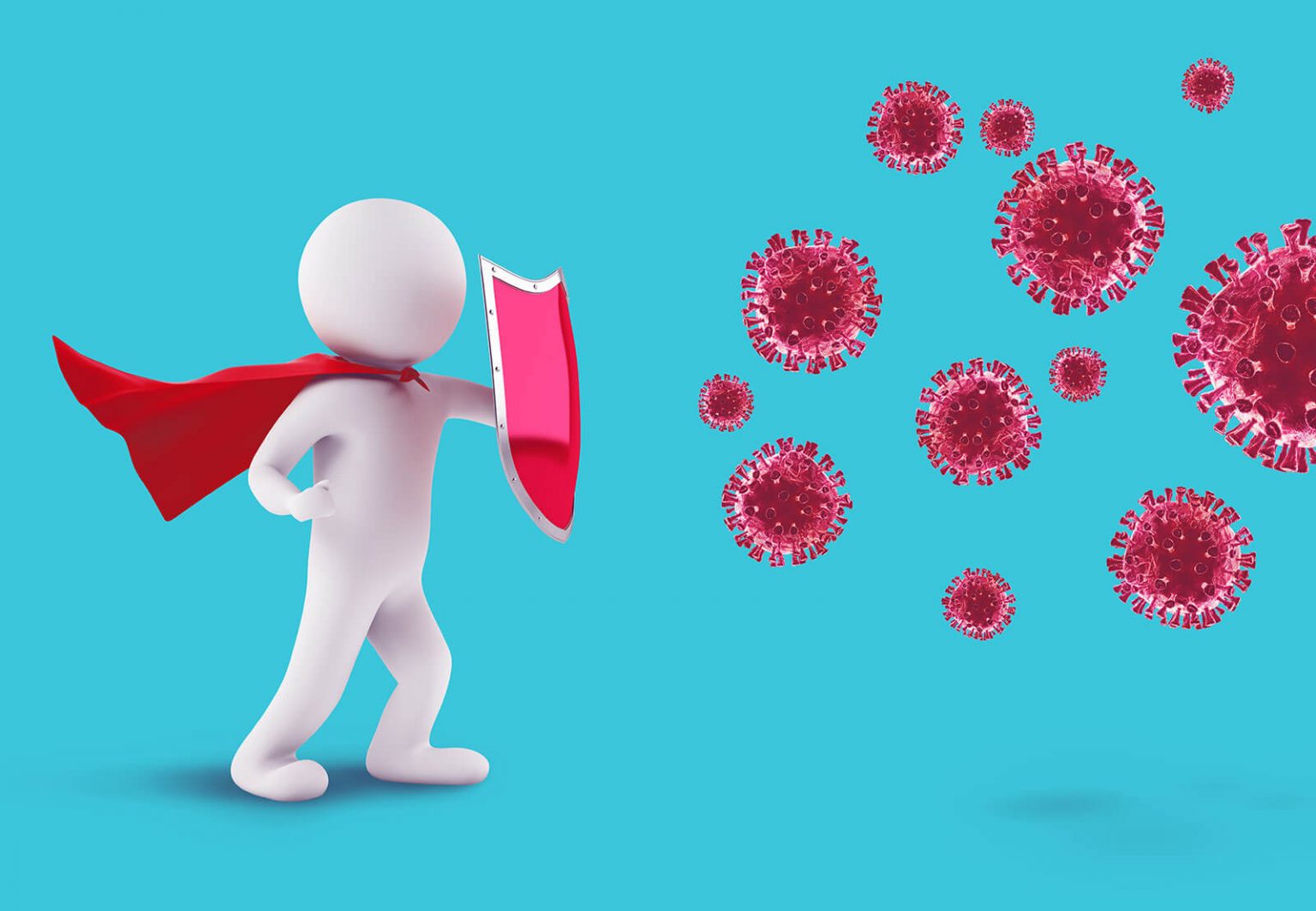 Posted at 08:31h in Medical Science, Trending by johnny

Let’s try and understand a little science and determine how viruses, infect our bodies and how our body fights back. I am not sure if you can recall those biology lessons back in school? However, let us revisit a little bit together because understanding what is going on is important. At the end of the day, knowledge is power.

Different types of viruses work in different ways. They have their own unique properties to invade the body, penetrate our cells and evade our immune defences. However, let us keep this simple and explain what is known as the lytic cycle. The lytic cycle explains how the virus uses its host (human) to replicate itself for further infection and spread.

Viruses enter the body from the external environment, most commonly through the respiratory tract. However, depending on their nature and the family of viruses they belong to, they can penetrate the body through any of the openings that we possess. Once they are inside the body they then have unique ways of getting into our cells. The unique properties of the virus, will determine on how it tricks the cell into letting it in. Therefore, the virus will usually target and affect a certain type of cell, like lung cells or those of the bowel. What happens next is pretty remarkable.
Once they have penetrated their unsuspecting cell, they inject their genetic material into our genetic material within the nucleus of the cell. Let’s just pause here and think about what this means……
Our genes are blueprints for building proteins. Proteins are integral to the many functions of the body. Collagen, the body’s most abundant protein helps to give structure to the body, haemoglobin is a complex of proteins, that transports oxygen within the red blood cells to be used everywhere, and our enzymes that are the workers of the body are all made up of proteins. Hormones, our chemical signalling molecules are protein in nature.
So, let us return to the virus and the insertion of its genetic material into our cells genes. With the viral genes now inserted into our own genetic material, our cells make proteins as they normally would. Only now, the new viral genes code for viral proteins, so the cell is manipulated into producing them. These proteins can then assemble to make new versions of the virus. The cell essential becomes a new virus factory. These completed viruses can then break out of the cell, massively disrupting its function, and results in inflammatory responses. The escaped viruses then repeat the process and invade other neighbouring cells, or seep into our secretions where they are delivered to a new human host via a sneeze, cough or more grotesque means.

It doesn’t sound good, does it? Well let’s now introduce our defence mechanisms, facilitated by our immune system. In fact, the lytic cycle of the virus doesn’t always cause the symptoms we often experience during a viral illness. These symptoms are usually a result of our defensive fight against the invaders, leading to inflammation and stress within the cells.
So, what is the immune system exactly? Let me introduce you to the defence network of highly specialised cells and proteins that respond to a viral invasion by trying to put a stop to the lytic cycle. There are slight differences in the body’s order of response to the different types of viruses and the immune response is so complex that we should keep this simple, otherwise this would quickly turn into a PHD.

The first thing to mention is how the immune system identifies an infected cell. The cells of the immune system police the body, looking out for signals, usually distress signalling proteins that are being displayed by the cell on their walls. Just like a beacon, these proteins are produced by infected cells, allowing them to be recognised by the immune system and display a fragment of the viral proteins being produced. Sometimes, however, some viruses are super specialised in manipulating the production of these protein alerting molecules and they can remain hidden from the policing immune cells. A good example of this is the HIV virus.

So, what happens next when the infected cell sends out its distress beacon? Well, as mentioned before, the order and immune cell involvement depends on the virus in question. However, normally the initial steps include these dramatically named cells and proteins: Cytotoxic T-Cells, Natural Killer Cells, Cytokines, Interferons and Antibodies. Just like any nation’s defence unit, each have particular roles to play in the attack and defence against body invaders. This does get a bit complicated and complex now, so will keep it very simple.

We shall begin with the cytotoxic T-Cells. These are cells programmed to kill! But, they don’t kill the virus directly, they kill infected human cells, displaying the distress signal on their membrane. Killing our own cells sounds a bit strange, but if we kill the cell that has become the viral factory, then viral production will fall. So, this is an excellent tactic. For those of you that are still worried about our cells killing each other, then don’t! Our cells are constantly dividing, replacing old ones and those that are malfunctioning, with fresh, new versions. It is part of normal biology and given good nutrition and good lifestyle behaviours, this process usually comes with no problems or issues.

What about those viruses that I mentioned earlier that are specialised to prevent the cell from producing the distress signals needed to alert the immune cells that they have been infiltrated? Well, in comes the natural killer cells. These cells are the back-up plan. Natural killer cells have the ability to recognise cells that are under stress when the distress signalling proteins are not there. Once stressed cells are recognised the natural killer cells programme the ‘stressed cell’ to die. This means there can be a faster immune reaction, albeit a bit more of a shot in the dark.

When the infected cells are identified, the cytotoxic cells release small proteins called cytokines. These cytokines are cell signalling molecules that allow for cell to cell communication in immune responses and stimulate the movement of cells towards sites of inflammation, infection and trauma. Almost like a call to battle. Their roles are much more complex than this, but for the sake of explaining the early response, I’ve kept it very simple.

The infected cells themselves don’t just succumb to their new inhabitants. They can secrete small pieces of viral proteins, called interferons. These signal to different immune cells and also tell neighbouring cells that they are next, so that they can begin to build defences in anticipation.

Finally, let’s discuss the immunity part of the immune system, the antibodies. Although their mass production usually occurs following an infection, antibodies can play an important role in early infection, if we have had exposure to that virus in the past. Antibodies, like the doorman at a bar, will remove viruses that have previously attacked our bodies, before they penetrate the cells. They are not getting in! Viruses that are bound to antibodies are unable to enter the cells and the antibodies display the virus in plain sight for specialised immune cells to come and destroy and digest the it.
Why don’t antibodies do the same with new viruses, that are attacking for the first time. Well antibodies are created by specialist immune cells when they learn more about the virus; how to recognise it and how to bind to it. Much like a research lab this process is slow and takes time and usually occurs at the end of or after the infective period. Once the antibodies have learnt the virus’s secrets, the antibodies are then present in the circulation at low levels, often for many years, and if they recognise the virus again, they will very quickly multiply and stop the invader in its tracts.

Well, there you have it, a bit of knowledge from the front line of a viral attack. I believe knowing a little bit about this subject helps people understand some of the basic science behind all of the amazing work and research conducted by the virology and immunology laboratories around the world.

This website uses cookies to improve your experience while you navigate through the website. Out of these cookies, the cookies that are categorized as necessary are stored on your browser as they are essential for the working of basic functionalities of the website. We also use third-party cookies that help us analyze and understand how you use this website. These cookies will be stored in your browser only with your consent. You also have the option to opt-out of these cookies. But opting out of some of these cookies may have an effect on your browsing experience.
Necessary Always Enabled
Necessary cookies are absolutely essential for the website to function properly. This category only includes cookies that ensures basic functionalities and security features of the website. These cookies do not store any personal information.
Non-necessary
Any cookies that may not be particularly necessary for the website to function and is used specifically to collect user personal data via analytics, ads, other embedded contents are termed as non-necessary cookies. It is mandatory to procure user consent prior to running these cookies on your website.
SAVE & ACCEPT